A dormant blog by Devanshu Mehta

Since I’m a former Mini Cooper owner, I got the following via email about their introduction of the electric MINI: 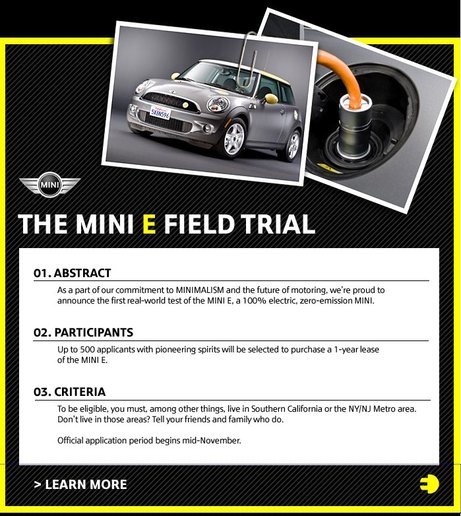 An email from MINI about their Electric car field trial.

500 people will be able to lease the MINI E for a year. The applications begin mid-November and are open to people in Southern California, New York and New Jersey.
Leave a comment

From Google, in honor of Halloween (I don’t get it either).

A lot of good links. And a calculator.

“No Impact Man”:http://noimpactman.typepad.com/blog/2007/08/interview-with-.html has put together a questionnaire for U.S. presidential hopefuls and John Edwards is the first to have answered. It’s a pretty straight and informed dialogue- I hope other candidates respond.

If you’re not familiar with <em>No Impact Man</em>, then his is a blog worth keeping track of. In his words:<blockquote>No Impact Man is my experiment with researching, developing and adopting a way of life for me and my little familyâ€”one wife, one toddler, one dogâ€”to live in the heart of New York City while causing no net environmental impact. To do this, we will decrease the things we do that hurt the earthâ€”make trash, cause carbon dioxide emissions, for exampleâ€”and increase the things we do that help the earthâ€”clean up the banks of the Hudson River, give money to charity, rescue sea birds, say.</blockquote>

This guy isn’t a nut- he’s doing this for the right reasons. To demonstrate that it can be done. To remove the cynicism and the inertia from the process of reducing our impact on the planet. This guy is the real deal and is an inspiration.

On the “Sky Trust”

Maybe I just don’t understand the “Sky Trust”:http://onthecommons.org/node/1178 proposed by Peter Barnes, but it sounds like a recipe for disaster. Here is the gist of the idea:

Under the Sky Trust plan, all companies that bring burnable carbon into the economy would be required to buy permits for the carbon content of their fuels. Each year the number of permits would be reduced.

Revenue generated from the sale of permits would be placed in a trust, managed by independent trustees. Earnings from the trust would be returned to U.S. residents as dividends and used for public investments that accelerate the transition to a low-carbon economy.

I’m not sure giving Americans financial gain for pollution is the solution; I understand that taxing pollution is already being floated as an idea, but giving the average citizen a bigger check when pollution levels rise can’t possibly make him appreciate the seriousness of the situation.

Of course, the idea of Sky Trust is a bit more nuanced, especially with the caps on total permits given to polluters which are reduced every year. The issue, however, is that if people get used to getting a $500 check every New Year’s day and all of a sudden that starts drying up, won’t the people be demanding a little more pollution?

I may be underestimating the general populace and I may be misunderstanding Sky Trust- let me know, I’d love to see it work.

For the second year in a row, “the ice stalagmite of immense importance to Hindus- the Shivalinga of Amarnath- has melted”:http://www.expressindia.com/fullstory.php?newsid=88957 completely at the beginning of the pilgrimage season. 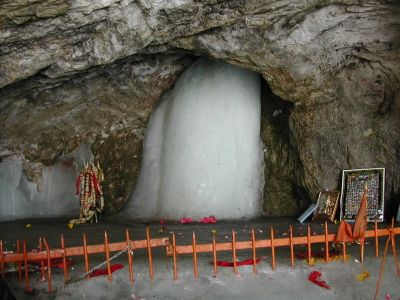 Scientists say the melting is due to increased temperatures due to climate change and to the heat generated by increasing numbers of pilgrims flocking to the site, located at an altitude of 3,800 metres.

GreenFuel: Algae That Eats Your Pollution

GreenFuel has algae that consumes CO2 and converts in to a biofuel. The idea is that their algae would consume emissions from smokestacks and become algae biomass. Algae biomass can be used as ethanol, biodiesel, and other stuff. The first bioreactor was attached at MIT and more have been installed elsewhere since. This one is being funded by a “VC”:http://www.polarisventures.com/ run by Robert Metcalfe, the guy who invented Ethernet at Xerox PARC. That’s right, Ethernet.

Profitable venture-capital backed companies that can spin the current system on its head- that is, making it cool and profitable to turn your emissions clean- are fantastic ideas to urge a transition from our present system to a better one. Of course, lower government mandated emissions standards or credits for lower emissions would make this technology a lot more lucrative.

“Scientific American”:http://www.sciam.com/article.cfm?chanID=sa006&articleID=000B557A-71ED-146C-ADB783414B7F0000&colID=13 has an interesting article by Michael Shermer on how he has been _flipped_ from being a skeptic- that is, not entirely trusting the environmentalist’s take on global warming- to becoming a believer based on overwhelming and undisputable facts.

Nevertheless, data trump politics, and a convergence of evidence from numerous sources has led me to make a cognitive switch on the subject of anthropogenic global warming. My attention was piqued on February 8 when 86 leading evangelical Christians–the last cohort I expected to get on the environmental bandwagon–issued the Evangelical Climate Initiative calling for “national legislation requiring sufficient economy-wide reductions” in carbon emissions.

Then I attended the TED (Technology, Entertainment, Design) conference in Monterey, Calif., where former vice president Al Gore delivered the single finest summation of the evidence for global warming I have ever heard, based on the recent documentary film about his work in this area, An Inconvenient Truth. The striking before-and-after photographs showing the disappearance of glaciers around the world shocked me out of my doubting stance.

I saw _An Inconvenient Truth_ last weekend and it is a fantastic film. It is a powerful film and has the urgency that this tragedy demands.

If you do doubt that global warming is real, then let me put it to you this way: even if it was not true, would you rather not be prepared for the chance that it is? Are you so convinced that it is not true, that you would bet the future of the planet on it?

On a related note, “TreeHugger”:http://www.treehugger.com/files/2006/06/4_stages_denial.php has a great piece on the four stages of global warming denial- from _theory not fact_ to _what about the bottom-line_. Well put together.

I just added “The Energy Blog”:http://thefraserdomain.typepad.com/energy/ to my Blogroll in the sidebar. This is a great blog run by James Fraser, a veteran of the energy industry and energy-related arms of the government. The emphasis of his blog is on technologies that can replace oil. Unlike many on the Internet, he knows his subject matter extremely well. In his own words, _The Energy Revolution has begun and will change your lifestyle_.

“Iowa State University researchers”:http://www.iastate.edu/~nscentral/news/2006/may/mold.shtml have discovered a method for using mold to break down corn fibers in to simple sugars that can be fermented to create Ethanol. Apparently, the process is not a simple one; corn fibers are very tough and do not degrade easily. Corn fibers are a byproduct of the wet milling process that produces corn syrup. And we all consume gallons of corn syrup mixed with caffeine (aka Coca-Cola) every year so this is good stuff and precisely the kind of thinking that seems to be required. Of course, the process only works on a small scale at the moment but mix a little venture capital or government money in and things become interesting.
[via The Energy Blog]