A dormant blog by Devanshu Mehta

On the 28th of October, 1998, Bill Clinton signed the Digital Millenium Copyright Act (DMCA) in to law. And the technology industry was never the same. This week, it turns 10.

The Anti-Circumvention Provision
The purpose of the anti-circumvention provisions in the DMCA was to prevent copyright pirates from defeating copy protection (DRM) mechanisms. In reality, neither the DMCA nor DRM have done nothing to stop piracy on the Internet. The DMCA has had an effect though- a chilling one. An effect on innovation, fair use, competition, expression.

On its own, the DMCA has managed to turn people into lawbreakers and pirates (including you).

In the past, you could always make mixed-tapes from your cassettes. Create video tapes of your favorite shows. Share your tapes with friends. Transfer old records to tape. And so on.

So why can’t you transfer your DVDs to your iPod without jumping through hoops? Or backup your BluRay discs on to your hard drive? Or read Amazon Kindle eBooks on your PDA? You bought them, so why can’t you space-shift, time-shift, format-shift these items without breaking the law?

The DMCA makes breaking digital locks illegal. This means that if you buy a product with a lock, you have no right to break that lock. In physical space, this would be equivalent of buying a safe, but having no legal right to break it open if you lost the key. The manufacturer could charge whatever they wanted to sell you another key (or choose not to sell you one at all). The safe and its contents are held hostage to its manufacturer. And good luck if they go out of business.

In short, a corporation could turn a legal action (like backing up your DVD) in to an illegal one, just by putting a digital lock on it. Not only does this stifle innovation and fair use of media, it also stifles the legitimate study of cryptography. If no one is allowed to crack digital locks, how do researchers build better locks?

This is the digital world we live in today. Did anyone ever tell you how and where you could read your (paper) books? 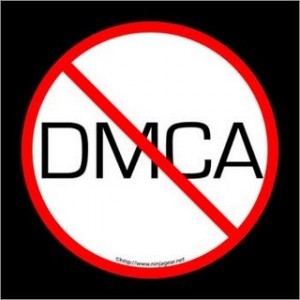 The Take-Down Notice
Another way in which the DMCA tilts the balance against fair use of copyrighted content is the “take down” notice. The way things stand now, if you see content on the Internet that you believe infringes on your copyright (say, a video), you can send a take down notice to the host (say, YouTube) and to remain on the right side of the law, the host has to stop hosting it.

The effect of this is that the entire burden of proving fair use of content is on the person who created the video. This has a chilling effect on expression and creativity. John McCain faced the wrath of the DMCA take down notice recently when some television networks sent take down notices to YouTube. The videos in question had some (fair use) clips from network news broadcasts.

At least Senator McCain can send a strongly worded letter to Google and have his videos restored. The rest of us are left with the burden of an unfair law.

The DMCA is a bad law with a large number of unintended consequences that make technology harder to use, harder to create and significantly tilts the balance against fair use.